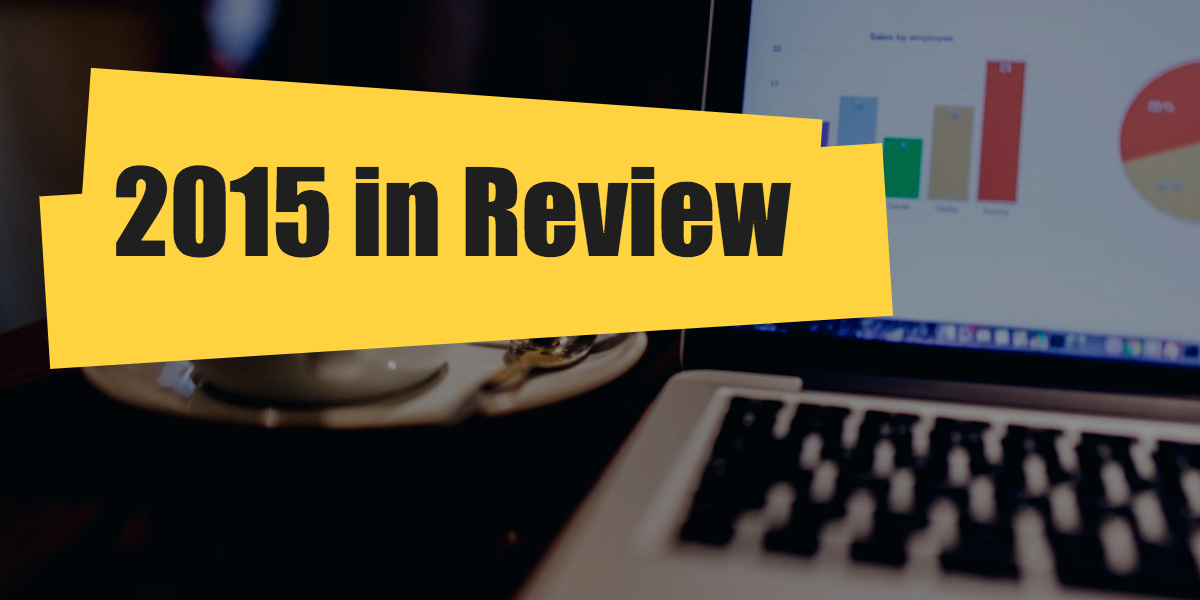 One thing you may have noticed with these blog posts, is that almost all the figures and data start from September 2015, when I started working on BugMuncher full time. Now that 2015 is over, it seems like a good time to look back on the year in its entirety, comparing things now to how they were when BugMuncher was just my side-project. I’ll also be looking at my plans for 2016.

Going back through that data, I was surprised to see how well things were doing at going into January 2015 - 19 paying customers, and a Monthly Recurring Revenue of $610. When I started working full time on BugMuncher 8 months later, I had 17 paying customers and $620 MRR, so things had clearly been stagnating for the first 8 months of the year.

When I started 2015 I had no idea that before the year was out I’d be working on BugMuncher full time. I’d always kind of assumed that BugMuncher would just continue its slow but steady growth as a side project, until one day I’d notice it was making enough money for me to live on, at which point I’d pack in the freelancing.

I’m still not 100% sure what drove me to take the drastic measure of going full time on BugMuncher before it was making enough for me to live on, other than I like to challenge myself. But looking at the revenue and customers now, I wonder if I’d subconsciously picked up on the fact that BugMuncher had been stuck in a rut for the first half of 2015, and would need the time investment from me to kick start the growth. 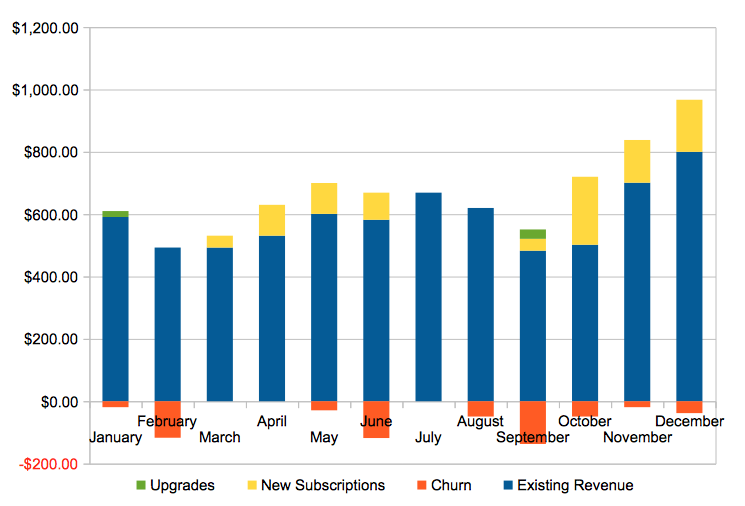 I like this graph, I’ve never seen BugMuncher’s revenue mapped out like this, broken down into sources. That’s because Fastspring, for all its strengths, has a really shitty admin interface, that doesn’t include information like this. It just took me a good 3 hours to create that graph, manually compiling the data, and checking each subscription to see if it had failed payments, refunds or upgrades. I’d love to do the same graph for 2014, but honestly I just don’t have the time.

As an aside, it may surprise you to know that I don’t have an admin interface at all for BugMuncher, when I want to do admin-y things, I have to ssh into the server and use the rails console. I will be building myself an admin interface soon, which will include all this kind of data, so I’ll be able to look at 2014’s revenue in detail then. Fastspring’s admin interface may suck, but it’s still better than BugMuncher’s.

The graph clearly shows that BugMuncher’s Monthly Recurring Revenue doesn’t really go anywhere until September, when I started working on BugMuncher full time, at which point there is a healthy trend of growth, which I can reveal has continued into 2016.

It’s fascinating to me that in July 2015, literally nothing happened. No new customers, no churn, no upgrades. It was right around this time that I started thinking about going all-in on BugMuncher, which adds more credence to my theory that I knew on some level BugMuncher had grown stagnant, even though I hadn’t been analysing the data.

It seems like ~$600 MRR was the best I was ever going to get out of BugMuncher while it was still my side-project. This is one of the reasons I love writing posts like this - now that I’ve really seen how BugMuncher had been performing through the first half of 2015, I feel even more justified in my decision to go full-time. 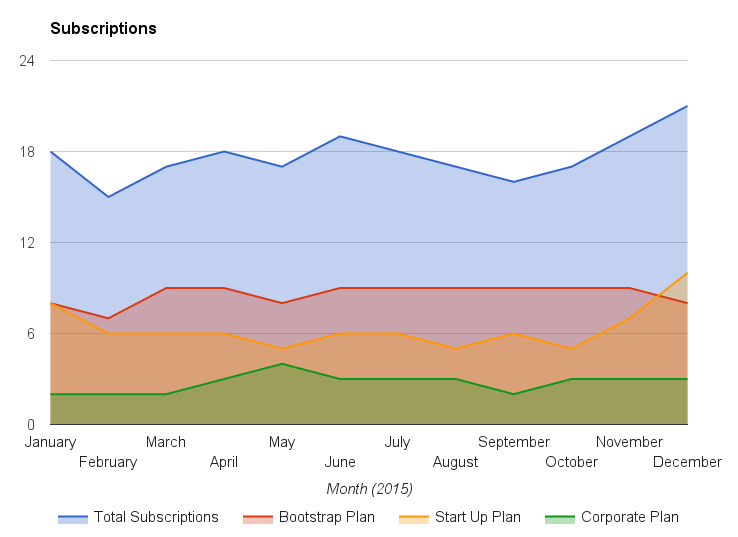 Just like revenue, the number of paying customers had been stagnating through the first three quarters of 2015. And again, like revenue, there has been a steady increase since I started working on BugMuncher full-time. An increase that has continued nicely into 2016.

I’m really happy with how towards the end of the year, the $59 / month Start Up plan overtook the entry level, $19 / month Bootstrap plan, to become the plan with the most customers. I really feel like I’ve hit a sweet spot with BugMuncher’s pricing.

I’m starting to notice a pattern here, as traffic was also pretty steady through the first three quarters of 2015. It’s great to see the effect my going full time on BugMuncher has had. Traffic peaked in November, simply because that’s when I was putting the most effort into traffic generation.

Towards the end of 2015 I stopped putting as much effort in generating traffic, as I found it wasn’t have a huge effect on my sign ups. While I was bringing more traffic, most of it wasn’t BugMuncher’s target audience. If I exclude blog traffic, I get more realistic idea of the number of qualified leads:

This shows that while traffic did still increase once I started working full time on BugMuncher, most of the additional traffic was to the blog only.

The next graph shows how as traffic increased, BugMuncher’s overall sign up conversion rate actually decreased. The decrease is less pronounced if I remove the blog traffic from the equation, but over all, while sign ups themselves are up, my conversion rate has dropped, which is something I’d really like to improve in 2016. 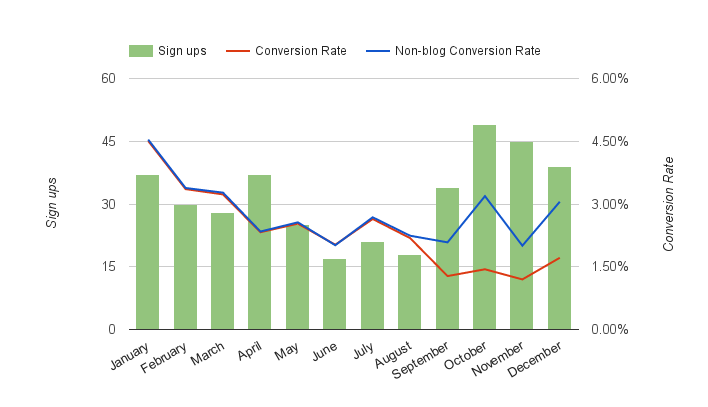 BugMuncher’s homepage changed quite a lot throughout 2015, I’m pretty happy with where it is now, and it’s cool to see how it’s evolved over year.

Warning: This slide show is pretty big (~22mb). It doesn't load until you hit the load button, so it's probably best not to load it if you're on a mobile connection.

I’ve already made some changes to the homepage that seem to have had a positive effect on the sign up conversion rate. The next big job for 2016 is a new control panel, as well as finally building myself and admin area. BugMuncher’s current control panel hasn’t changed much for a few years, and could really do with a refresh. I’m also taking this opportunity to separate out the codebase, as currently all of BugMuncher is one big Ruby on Rails app that has grown organically over time. The new version will have 4 separate code bases: A back end API, the control panel, the feedback widget, and an admin area.

I’m still contemplating a name change, to better match BugMuncher’s new direction, but at the very least I’m going to have a new logo made at some point this year.

I’ve got a lot of new features planned for BugMuncher, and I’m going to be publishing a public road map detailing all of those soon.

Of course, my main plan for 2016 is to become profitable, and judging by the growth through last 5 months, that’s a completely realistic goal.