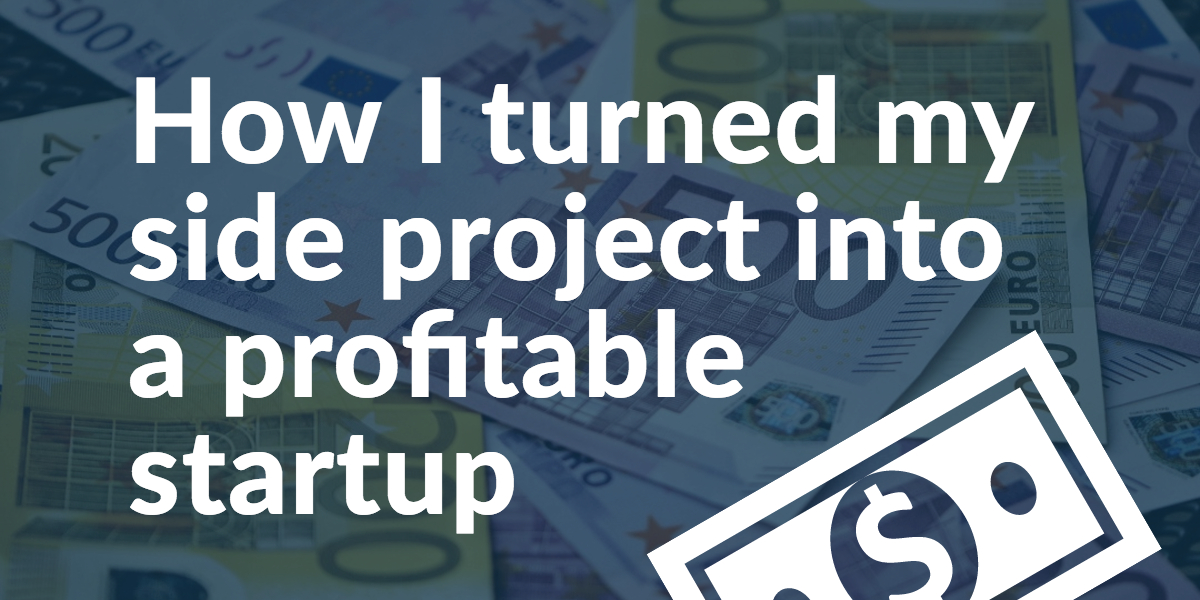 How I turned my side project into a profitable startup

As regular readers will already know, in November 2016 BugMuncher finally reached profitability, completing the quest I embarked upon 15 months ago. It’s pretty awesome to know that BugMuncher is now covering all of my living expenses, and is 100% bootstrapped, ie: no outside funding, and no debts.

I thought for my first post of 2017 it would be interesting to look back at some of things that I think helped me achieve profitability:

People often ask me what one single thing I did that had the biggest impact on reaching profitability. Without a doubt, the answer is going full time. Simply being able to focus all of my working day on BugMuncher had a huge effect on my productivity, and revenue growth.

For the first couple of months I tried keeping on one freelance client to bring in some extra income, but I quickly found that didn’t work, I needed to be all in. To quote Paul Graham “Nothing kills startups like distractions. The worst type are those that pay money”.

Once I fired that last client, and was able to really focus all of my time on BugMuncher, that’s when things really started to happen.

Of course, you can’t go full time if you can’t afford to live. By the time I started my mission to make BugMuncher profitable, I’d saved up around £20,000 through freelancing and living frugally.

At this point, I’d already been running BugMuncher as a side project for over 4 years. I had a fully functioning app, with a handful of paying customers. Outside funding didn’t make sense to me.

I think if you’ve already got a functioning side project that brings some revenue, and you’re not looking for world conquering growth followed by a multi-million dollar exit, seeking investment isn’t always the best move.

I spent about £14,000 of my runway before I reached profitability, which is a rounding error in the world of venture capital. My point is, if like me your goal is to build something that allows you to live comfortably, and grants you a lot of free time, you don’t need masses of capital.

As a full-time freelancer my take home salary was £2,200 / month. When I decided to stop freelancing and focus on BugMuncher full time, I cut that by over a third to £1,400. I arrived at that figure by working out how much money I needed to pay for rent, food and bills, and then added some extra for leisure and emergencies.

This definitely worked well, as I never ran out of money, and was still able to enjoy life, all while saving £800 / month.

Hope for the best, plan for the worst

So, I had decided to go full time on BugMuncher, and I had £20,000 in runway. BugMuncher was bringing in about £400 / month, and with my reduced salary, my total expenses where about £1,800 / month. The next thing I did was work out my worst case scenario, ie: how slowly could BugMuncher grow, while still reaching profitability before the runway runs out?

Using this handy startup growth calculator I calculated that if revenue grew 7% month on month, I’d reach profitability in about 2 years, and would use up all of my runway. This was my worst case scenario. Working this out was reassuring, as during BugMuncher’s years as a side project, it had grown at 5% each month, so 7% didn’t seem so daunting.

Of course, I didn’t want to cut it that fine, but at least I now knew where the threshold of failure was. Instead I set myself the growth target of 10% each month, which would mean I’d reach profitability in about 15 months, and spend around £14,000 of my runway. Which funnily enough is exactly how it worked out.

This follows on from what I wrote above - what if I couldn’t keep BugMuncher’s month on month growth above 7%?

I set myself a time line of what actions I’d take if it ever looked like my runway was going to run out before BugMuncher reached profitability. You can read the full plan in this blog post, but the highlights included giving up my desk at a local co-working space if runway dropped below 6 months, and even selling my motorcycle if it dipped below three months.

Thankfully I never had to put any of that plan into action, but I’m glad I had plan there just in case.

There are those who say “a startup is too much work for one person” and “being a solo founder is a bad idea”. Personally, I think that’s a crock of shit. If you and some friends decide to start a business, that’s awesome, but trying to find a co-founder just for the sake of it seems like a bad idea to me, not to mention a waste of time.

There are plenty of successful solo founders, and ultimately there is no one-size-fits-all solution for running a business. Initially with BugMuncher I was afraid my solo status would put customers off, so I’d use the royal we when really I just meant me.

Eventually I learned to embrace being a solo founder, and even turned it to my advantage. Eg: this is the first thing anyone sees after signing up for BugMuncher: 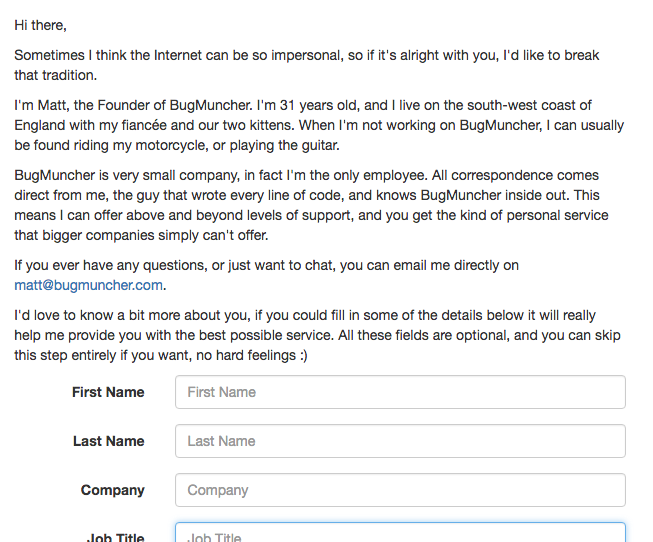 Throughout this journey, I’ve been blogging with complete transparency, right down to how many customers I have, revenue figures and how much money I have left in the bank. I’ve had an overwhelmingly positive response to these posts, people really seem to love being able to follow my progress form zero to profit.

The total transparency has also been really helpful to me, as posting detailed numbers each month forces me to keep on top of them. I’ve also had a couple of customers find BugMuncher from the blog posts.

As I added new features and increased the limits of the plans, I also increase the prices to new customers, existing customers of course got to keep their lower price. Today BugMuncher’s plans are now $29, $59 and $199. I’ve had no complaints about the pricing increase, but my average subscription value has nearly doubled to $61.23.

That means that if I hadn’t upped my pricing, but everything else had stayed the same, I’d only be half way to profitability right now.

Be awesome at customer support

This was definitely one of the most important factors, second only to going full time. Small companies have a huge advantage over big enterprises when it comes to customer support, and I made sure to fully utilise that advantage.

When ever someone contacts BugMuncher, they get a very quick response, from me, the guy that built BugMuncher. This means I’m always able to offer a satisfactory response, and can fix any problems straight away.

Just like embracing my solo status, this one goes against conventional wisdom, but it definitely worked for me. I enjoy programming, and I enjoy running BugMuncher, but spending 80+ hours a week doing so sounds like my nightmare. Many tech startups seem to expect that kind of “commitment” (aka: indentured servitude) from their employees, but I’d definitely advise against it.

Sure there were occasional days where I’d be in the zone and work for 12 hours, and even some weeks where I’d do 6 or 7 days. But there were also many days where I would start late, finish early, or just decide not to work at all, and since November 2016 I’ve been working a 4 day week. I’ve never measured it, but I suspect my average desk time is around 30 hours a week.

Maybe I could have reached profitability quicker if I’d put more hours in, but I’ve found working more hours brings diminishing returns. My main goal in life is to enjoy myself, I want to be able to spend time with my fiancée, work on my car, go climbing, watch films, get plenty of sleep, and sometimes spend entire days doing sweet fuck all. How could I have done all that if I were working 100 hour weeks?

And now that I’ve finished writing this post, I’m going to go and enjoy a leisurely 2 hour lunch break 😃 Thanks for reading.