It's OK to reject potential customers

In the UK (and I assume most other countries), you’ll often see a sign like this in shops, restaurants and pubs:

"We reserve the right to refuse service to anyone."

I believe the same should apply to startups and online companies. This line of thinking is nothing new, many people more successful than I have expressed similar sentiments, but usually in relation to getting rid of existing difficult customers - Groove has a great article on the subject. I’m talking specifically about telling potential customers that you don’t want their business, before they’ve even started paying.

This is something I’ve actually done before.

There are a few metrics I keep an eye on that give me a good indicator of whether a free trial is likely to convert to paying customer. When ever I see one of my free trials is likely to convert to paying, I like to do some research in to their company, mostly to satisfy my own curiosity, but also to help me provide them with the best possible service.

Back in August 2016, when Saber was still called BugMuncher, and not yet profitable, I saw a very promising free trial. The first thing I did was check out their website, flexispy.com. I’d never heard of them, but it definitely sounded interesting.

When I visited their website, my interest quickly turned to horror, as I realised what this company does. Flexispy provides software for spying on people’s mobile phones, tablets, and computers. The website proudly proclaimed their software was ideal for keeping tabs on employees, children and spouses. (They seem to have since removed any references to spying on spouses from their website, and the wayback machine doesn’t have their site archived, but I’m sure it was there at the time.)

Worse still, to install their spyware on an Apple device, you first need to jailbreak it:

Their website claims this is easy, and that they can even help. Of course they fail to mention that jailbreaking an Apple device will void its warranty.

At this point I had already decided that I didn’t want Flexispy as a customer, and when I reached the footer of the page, that decision was cemented even further:

Interestingly the footer hasn’t changed much in the last three years, as I clearly remember seeing the words “You have a duty to know” back then. Their whole website and business model made me feel very uncomfortable.

Knowing that I didn’t want their money, nor did I want my startup to be in any way associated with them, I ended their free trial and sent them the following email:

I didn’t hear back from them, so assumed that was the end of it.

Until 2 weeks later, when I received an email from a different @flexispy.com email address. They wanted to know if the final “Thank you for your feedback” message in the Saber Website Feedback Tool could be customied. It was then I realised someone else at Flexispy had signed up for a new free trial.

I don’t think they were knowingly trying circumvent the previous rejection, I suspect this happened due to confusion and/or mis-communication in the Flexispy offices. So I gave them the benefit of the doubt and sent them the following email: 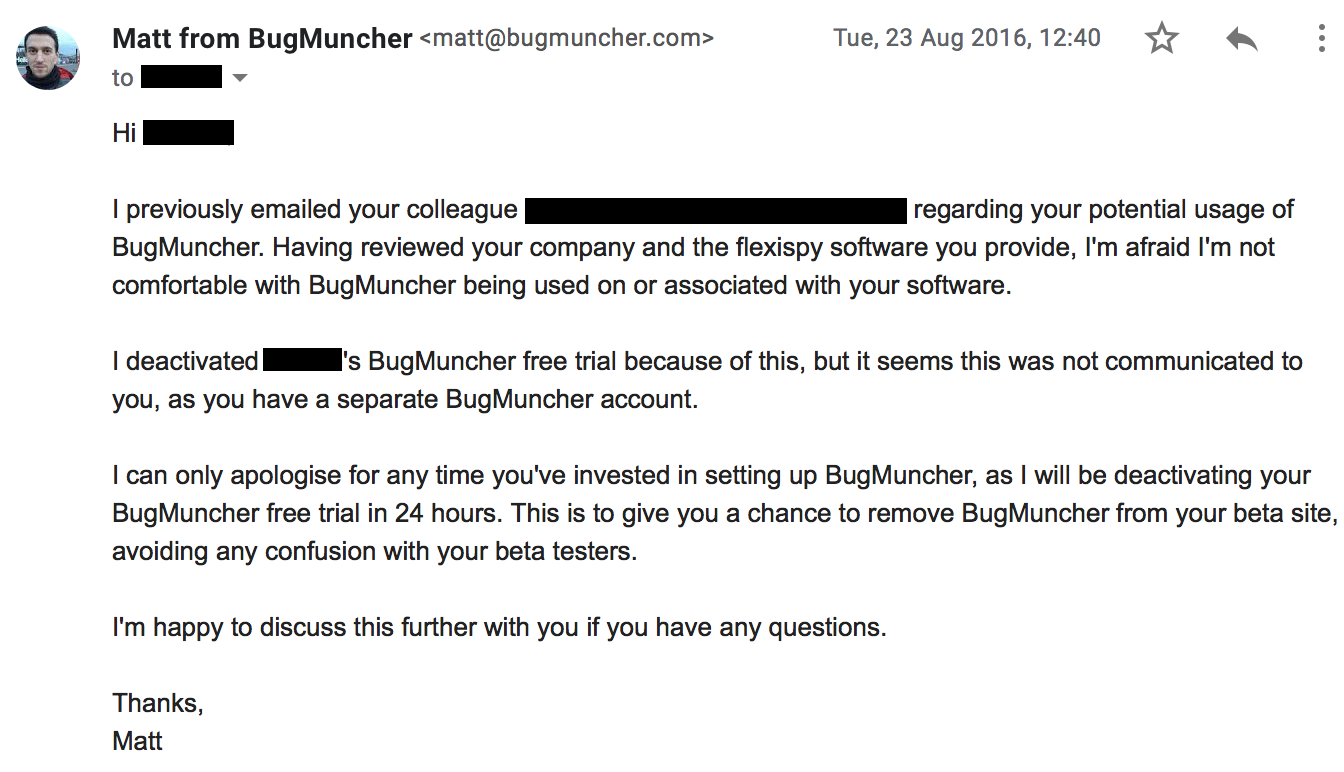 I tried to keep the emails as friendly and non-judgy as possible, although I’ve no idea how they took it, as once again I didn’t receive a response. At least it was the last time anyone from Flexispy tried to sign up.

I feel pretty confident that had I not rejected them, they would have converted to a paid subscription. Not only did they show the usual markers of an account likely to convert, they also signed up for a new trial when I closed the first one, and then wanted to know about customising the feedback widget.

So while I can’t say for sure, it’s very likely I turned down a paying customer, at a time when I wasn’t even making any profit. However, I could still look myself in the eye, and feel good about where all my money comes from, and to me, that’s much more important.